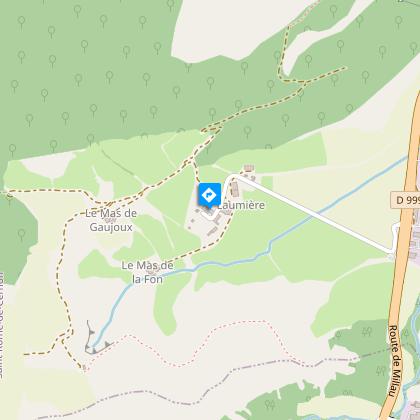 The castle is situated 3 km south east of Saint Rome and was rebuilt after the French revolution. Written references to the ancient castle mention the year 1322 when it was occupied by Raymond de Vanco de Banc d'Anglars, and again in the 15th century when it was owned by the Armagnac family. It was then passed on to the Morlhon family, the Vernhet de Grandval family and the Sambucy de Sorgue family. The Laumière seigneury was granted to the Vernhet’s during the 18th century who became Vernhet de Laumière. A general named Vernhet de Laumière distinguished himself on taking command of the Imperial Guard artillery during the Second Empire. He died in Mexico during the 1863 siege of Puebla. During the 19th century, Maria de Sambucy gave the castle as a wedding dowery to the Count of Toulza