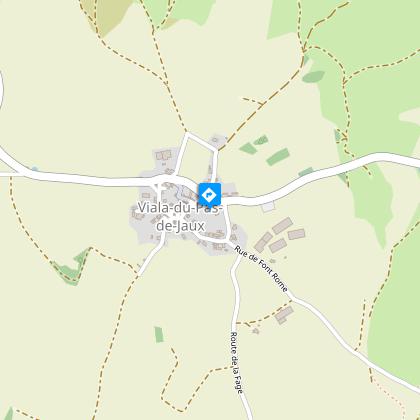 The Lord of Tournemire gave to the Templars knights the lands of Viala du Pas de Jaux in 1150. In the 12th and 13th centuries, the Viala consisted of a few farms.After 1312, when the Hospitallers took possession of the Templars’ property, they decided to create in this place a village and for that they built farm buildings, managed by the brothers of the order. They constructed for them a dwelling and a church dedicated to St-Jean-Baptiste, the patron of the Hospitallers.Until 1430, the inhabitants of Viala du Pas de Jaux and the surroundings took refuge in Ste-Eulalie de Cernon during the periods of insecurity which occurred on the Larzac. Because of the high distance between the two village, the inhabitants asked the authorization to the Grand Prior of Saint Gilles, to build a fortified tower to be able to take refuge inside with their possessions. This is the first fortification built on the plateau.Today the 30 meters high tower has been restored. The vaulted ground floor, the five floors, its terrace and the dwelling dating from the 14th century are now accessible.