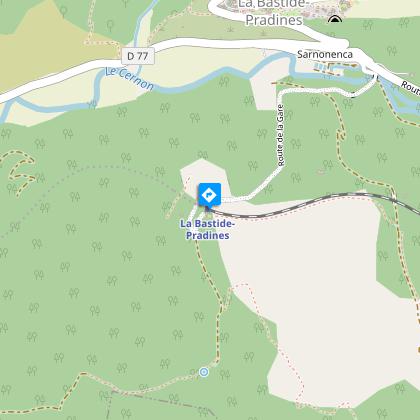 This old railway line connected Le Vigan to Tournemire climbing the foothills of the Larzac. It was granted to the Compagnie du Midi in 1883, works began in 1881 and lasted 11 years. Over 60 kilometers, this line has 32 tunnels, 12 viaducts and several kilometers of retaining walls.In 1896, the traffic of the travelers is put in place: 3 trains a day circulate in 2 directions. It takes 2:15 to make Le Vigan - Tournemire and only 2:00 in the opposite direction.The First World War caused the first threats on this line. Since 1917, there was talk of dismantling the rails between Le Vigan and Nant-Comberedonde. Traffic resumed gradually to reach its highest point in 1922, with 372 travelers per day and 33,000 tons for the year.Freight traffic remained alone on the entire line until June 1951.Closed to all traffic in 1952, the railway between Avèze and L'Hospitalet was removed in 1955. In 1960, the rails were removed between L'Hospitalet and Tournemire, then it was decided to hand them over in 1977 as part of the extension project of the military camp of La Cavalerie. The project was abandoned in 1981, no convoy took this section. It is used today by the Vélorail du Larzac in Ste-Eulalie de Cernon.