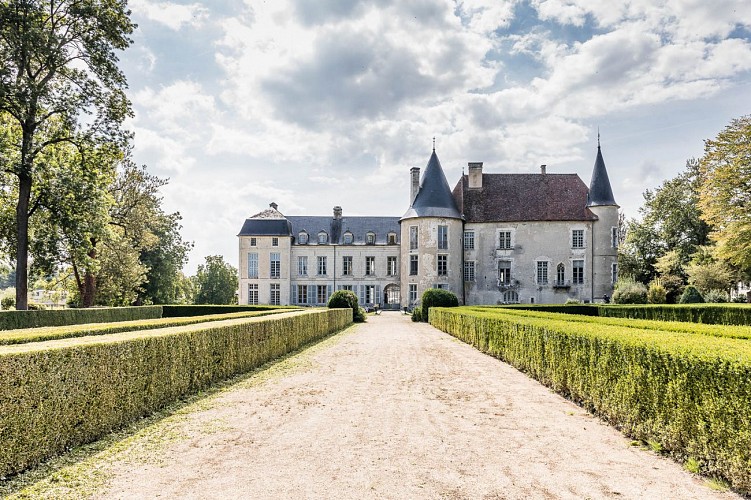 The Castle of Ricey-Bas is one of the oldest in the region since it was in 1086 that Robert 1, Lord of Les Riceys, laid the first foundations. Among its most prestigious inhabitants, the famous Chancellor of Burgundy Nicolas Rolin (founder of the HOSPICE DE BEAUNE), settled there in 1424.

The castle has passed from family to family over the centuries, devastated several times, it was considerably overhauled by its various owners and today consists of two main houses that intersect at right angles.

In the oldest part remains the kitchen of the old feudal castle with its vaults and large fireplace and cellar dating from the 12th century. This wing rebuilt successively by the families CREQUI and VIGNIER in the 16th and 17th centuries has two floors topped with an attic and rooms bearing the names of the various different owners.

The other main building built in the 18th century has a façade whose classic style contrasts sharply with the feudal parts and is the link with the 17th century pavilion built in place of the demolished old tower.

A garden and park of more than 25 hectares surround the castle, with its box hedges, a carved stone globe (a sundial). In the kitchen garden there is a dovecote built by LOUIS VIGNIER, president of the Parliament of Metz, probably in 1646. At the entrance, built by Mr de POMEREU in the middle of the 18th century on the site of part of the fortifications, are magnificent stables.

For more than 200 years the same family own the castle and now the descendants of the Baron and Baroness de TAISNE. Lt. Col ANGELITO DE TAISNE and his wife CLAUDE du BOIS de RIOCOUR decided in 1967 to settle there. They made the bold decision to embark on the wine growing adventure and undertake important restoration works on the castle and the park, while investing in the town life as municipal councillor, then mayor and in many associations for the development of local life.

Today, inspired by their parents, their children undertake important restoration and beautification works, with the support of the Regional Directorate of Cultural Affairs of Champagne-Ardenne region and the Department of Architecture and Heritage and in collaboration with Pierre BORTOLUSSI, Chief Architect of Historical Monuments and his teams.