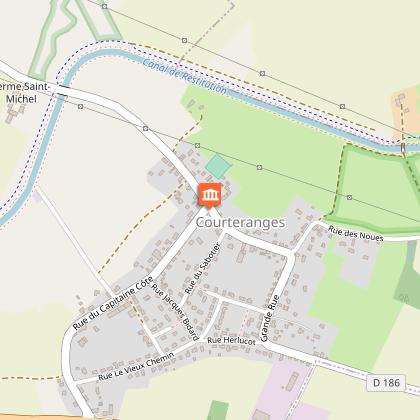 Curtis argentareï or the farm of the argentier was the name given to Courteranges in the 9th century, the argentier being a Trojan banker established in the village. The village is situated on the left bank of the Barse River, which now feeds the Lac d'Orient. A bit of geography: 255 inhabitants in 1790 - 425 inhabitants in 1999 Name of the inhabitants: the "Courterangeois" or the "Courtrangeons" Nickname of the inhabitants: the "Courterangaulois" 647 hectares in surface area Wet agricultural region: Wet Champagne Geographical region: Southern forests of the Wet Champagne A bit of history: The lordship of the village was given to the abbey of Montiéramey by Charles Le-Chauve on February 10, 874. The abbey kept it until the Revolution. The bridge of Guillotière, allowing to cross the Barse, was the object of a historical episode during the war of 1814. The name given to this bridge is the name of the village that existed in the 16th century. On 3 February 1814, the defence of the bridge was entrusted to the guard of General Gerard by Napoleon Bonaparte, in order to avoid the retreat of the French army from Piney to Troyes. Faced with this solid occupation, the enemy, Count Colloredo and the Bohemian army, renounced a frontal attack that was deemed to be a massacre. He was then driven back for more than three days to Clérey, a few kilometres to the south. The path known as "the Corvée" is made of chalk and gravel without mortar. It crosses the southern territory, from east to west, and excavations have allowed us to authenticate the presence of important Roman activity. In the 19th century, white earth was exploited for the earthenware factories of Vendeuvre-sur-Barse and Mesnil-St-Père and in the 20th century, the main activity of the village was animal husbandry. Cultural heritage: Church dedicated to the Nativity of the Virgin in 1959: it replaced the old church of Romanesque origin impossible to restore. It houses a remarkable carved wooden painting representing Jesus Christ and some ancient statues such as the Child Jesus of Prague symbolizing the authority of God. The church, as well as the school and the town hall, are of modern architecture (built from 1957 to 1959). Dovecote of the Pont-Barse farm. Mill built in 1793: it operated until 1952, using hydraulic power. Houses of traditional architecture with a triangular roof, perpendicular to the main street of the village: rue Commandant Gaston Gagnière (village resistance fighter). Sundial built on the village hall by local artists, Mr and Mrs Dauphin. Natural heritage: The commune is home to a heronry occupied by about a hundred birds that have built gigantic nests on top of oak trees, a centenary chestnut tree, a Lebanese cedar of more than 3.50m in circumference, a rich and unique fauna and flora thanks to the natural wet meadows, ponds and marshes: angular garlic, dwarf violet, buttercup with ophioglossus leaves. Natura 2000 classification.