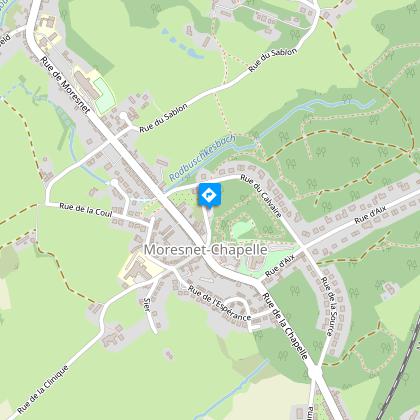 The devotion to the Virgin Mary began in Moresnet in 1750, after the young epileptic Arnold Franck was cured of his illness. Towards 1875, Franciscan monks from Aix-la-chapelle, who had been driven away by the "Kulturkampf", settled down in the area. They took charge of the pilgrimages to Notre-Dame du Petit-Chêne (Eikschen). Their importance increased quite substantially. Anxious to associate the devotion to the Blessed Virgin with the worship of Saint Francis of Assisi, the Abbot Johannes Ruiter planned a stations of the cross. When the scheme got underway the landscape was completely transformed. All the hillocks and the mound of the 12° station were created on a flat piece of land, with the resources available at the time and thanks to the voluntary services of many people living in the neighbourhood. Each station has its own specific features. The vaults and walls of the caves made of annular shaft stone are covered on the outside with lava blocks. The Calvary was officially opened on 25 May 1902, but was completely finished on 13 September 1903. Since then numerous processions, torchlight parades and religious events have been held in this idyllic setting. Pilgrims and visitors can all be sure of finding a piece of paradise, greenery and a peaceful environment at the Moresnet-Chapelle wayside cross. Nor are lovers of fine food left out. Visitors are spoiled for choice thanks to the numerous restaurants and tasting rooms.