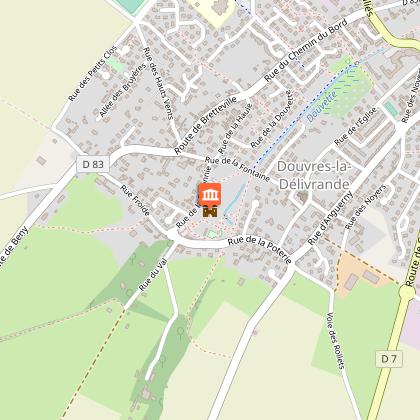 The creation of a barony at Douvres probably dates back to the 11th century. At that time, its owners were relatives of Duke-King William the Conqueror. It was sold during the Revolution and became the property of the city in 1974. The age of the buildings and the present remains range from the 12th to the 17th century. We can still see two buildings, remodelled at ﬁl at the time, which served as a hall (ceremonial room, reception, even courtroom) and the other as a dwelling. These two buildings are part of the layout of a 13th century Anglo-Norman estate. There was also a chapel which would date from the ﬁn of the 12th century and of which only a few walls, buttresses and departures of columns remain. Nowadays it is a cultural space, a place for walks and games.