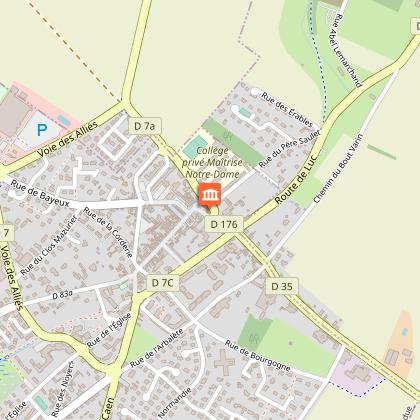 On this site there was a Gallo-Roman temple which was replaced by the Romanesque chapel Notre-Dame in the 12th century (of which only the Romanesque arches can still be seen). The present basilica was built between 1854 and 1895 by Father Louis Saulet and his successors. This basilica recalls the history of one of the oldest Norman pilgrimages dedicated to the Virgin Mary through the illustrations of the tympanums of its three entrance doors. A Gallo-Roman sanctuary was already dedicated to the cult of the mother goddess brought by legionaries from Africa; this would explain the black complexion of this statuary. In the 7th century, this cult was replaced by a Christian one. In the 9th century, the statue of the virgin disappeared during the Viking raids. Later, in the 11th century, one of the sheep of the Baron of Dover, scraping the ground, digs up the statue of the disappeared virgin. Aﬁn to celebrate it, a new chapel is created but in the 16th century, the Protestants destroy the statue of the virgin, which will then be replaced by the one now present.