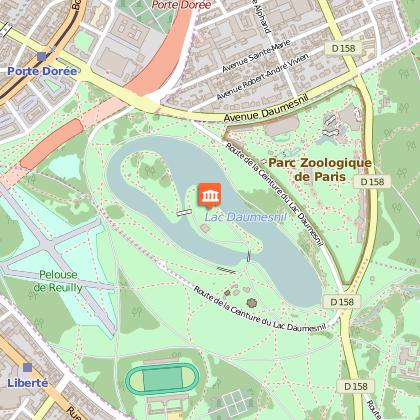 L'île de Reuilly is one of the two islands of the lake Daumesnil in the wood from Vincennes to Paris in France. It is connected in the East by a bridge with the banks of the lake and on the West in the island of Bercy.Characteristics
Its name of its closeness with the district of Reuilly, is an artificial island of a surface about 2,5 hectares. Boorishly in the shape of bean, she measures 300 m of length in her biggest length and at most 100 m of wide. She occupies the center of the lake Daumesnil, in the extremity West of the wood of Vincennes. The island of Bercy, shape and similar size, is immediately situated on the West.The island was created during the arrangement of this part of the wood of Vincennes and the construction of the lake Daumesnil. She is connected with the southeast bank of the lake by a small bridge with suspension of about twenty meters long. On the West, the second similar bridge connects her with the island of Bercy. A path allows to make the tour of the island. A part of this path, under the name of " road of Islands ", is accessible to motor vehicles and allows them to reach the restaurant.Source : Wikipédia – Reproduction d’extraits du texte original.
Licence Créative Commons paternité partage à l’identique.
Photo : Georges Seguin