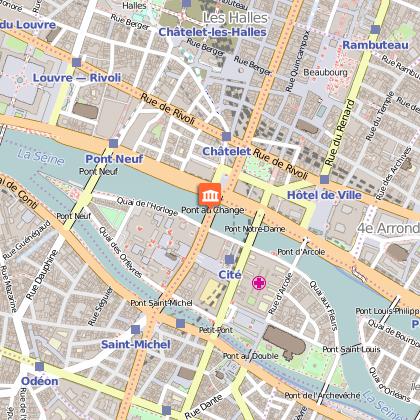 The Pont au Change is a bridge over the Seine River in Paris, France.The bridge is located at the border between the first and fourth arrondissements. It connects the Île de la Cité from the Palais de Justice and the Conciergerie, to the Right Bank, at the level of the Théâtre du Châtelet. Bridge location on the Seine  Pont au Change in 1577.Several bridges bearing the name Pont au Change have stood on this site. It owes its name to the goldsmiths and money changers who had installed their shops on an earlier version of the bridge in the 12th century. The current bridge was constructed from 1858 to 1860, during the reign of Napoleon III, and bears his imperial insignia.The Pont au Change is featured in the novel Les Miserables by Victor Hugo. Police Inspector Javert finds himself unable to reconcile his duty to surrender Jean Valjean to the authorities with the fact that Valjean saved his life. He comes to the Pont au Change and throws himself into the Seine. It also plays a role in the novel Perfume: The Story of a Murderer by Patrick Süskind; the perfumier Baldini, who takes the protagonist Grenouille as his apprentice, owns a shop on the bridge. After Grenouille leaves him, the bridge collapses and his house and shop, with him inside, falls into the river.