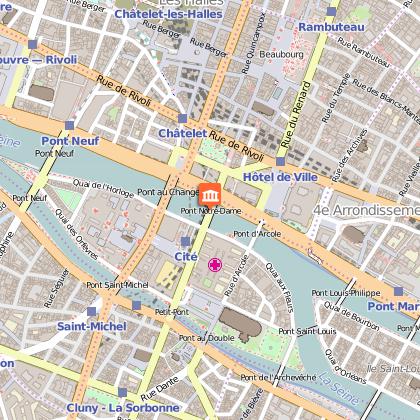 The Pont Notre-Dame is a bridge that crosses the Seine in Paris, France linking the quai de Gesvres on the Rive Droite with the quai de la Corse on the Île de la Cité. The bridge is noted for being the "most ancient" in Paris, in the sense that, while the oldest bridge in Paris that is in its original state is undoubtedly the Pont Neuf, a bridge in some form has existed at the site of the Pont Notre-Dame since antiquity; nonetheless, it has been destroyed and reconstructed numerous times, a fact referred to in the Latin inscription on it to honor its Italian architect, Fra Giovanni Giocondo. (See below.) The bridge once was lined with approximately sixty houses, the weight of which caused a collapse in 1499. HistoryIt was on this spot that the first bridge of Paris, called the Grand-Pont, crossed the Seine from antiquity. In 886, during the siege of Paris and the Norman attacks, this structure was destroyed and replaced by a plank bridge, named the Pont des Planches de Milbray (Milbray plank bridge). This bridge was destroyed by the floods of 1406. On May 31, 1412, Charles VI of France ordered the construction of the first version of the bridge to be named "Notre-Dame". This structure was composed of solid wood and connected the Île de la Cité to the rue Saint-Martin. The bridge took seven years to build and had sixty houses atop it, thirty on each side. The houses were noted by Robert Gauguin as being "remarkable for their height, and the uniformity of construction" and was called the "handsomest in France."King Charles' wooden bridge collapsed on October 25, 1499 near 9 a.m., likely due to structural instabilities caused by the lack of repairs. Stone foundations were laid for a new bridge that same year, while a ferry filled the transportation void. This time, the bridge was built with stone, as an arch bridge under the direction of Italian architect, scholar and Franciscan Friar, Fra Giovanni Giocondo, who had also overseen the building of the Petit Pont. The construction was completed in 1507, still overhung with sixty stone and brick buildings all built to one tall gabled design, and would become a spot of frequent commerce and trading: here was located the tiny boutique of the marchand-mercier Edme-François Gersaint, whose shop-sign was painted by Antoine Watteau. The houses upon the bridge were the first to be given numbers. In 1660 the bridge was refurbished to honour the arrival in Paris of the daughter of the king Philip IV of Spain, Maria Theresa of Spain who became queen of France by marrying Louis XIV.Between 1746 and 1788 the houses along the bridge were demolished for sanitary purposes and because of the danger the structures caused to the bridge's stability. In 1853, a new stone structure was completed atop the existing stone foundation, although this reincarnation was only composed of five arches. The new bridge was subsequently the cause of not less than thirty-five water traffic accidents between 1891 and 1910 and was given the unofficial name the pont du Diable (Devil's Bridge). Thus, in order to facilitate the passage of boats and the flow of the Seine, a decision was made to rebuild the bridge, this time in metal. The new work was directed by Jean Résal, who had also worked on the Pont Mirabeau and Pont Alexandre III; it was inaugurated in 1919 by Raymond Poincaré, President of the French Republic. The structure has remained the same since.