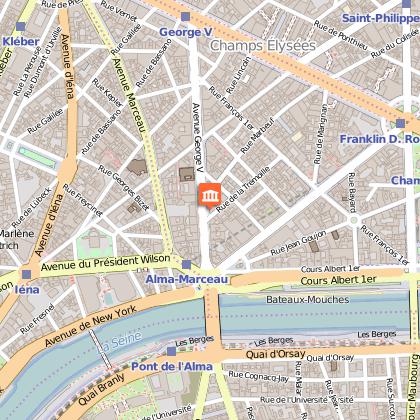 The Flame of Liberty (Flamme de la Liberté) in Paris is a full-sized, gold-leaf-covered replica of the new flame at the upper end of the torch carried in the hand of the Statue of Liberty at the entrance to the harbor of New York City since 1986.The monument, which measures approximately 3.5 metres in height, is a sculpture of a flame, executed in gilded copper, supported by a pedestal of gray-and-black marble. It is located near the northern end of the Pont de l'Alma, on the Place de l'Alma, in the 8th arrondissement of Paris.It was offered to the city of Paris in 1989 by the International Herald Tribune on behalf of donors who had contributed approximately $400,000 for its fabrication. It represented the culmination of that newspaper's 1987 celebration of its hundredth anniversary of publishing an English-language daily newspaper in Paris. More importantly, the Flame was a token of thanks for the restoration work on the Statue of Liberty accomplished three years earlier by two French businesses that did artisanal work on the project: namely, Métalliers Champenois, which did the bronze work, and the Gohard Studios, which applied the gold leaf. While the gift to France was prompted by the centennial of the newspaper, the Flame of Liberty, more broadly, is a lasting symbol of the friendship uniting the two countries, just as the statue itself was, when it was given to the United States by France.This project was overseen by the director of the French craft unions at that time, Jacques Graindorge. He foresaw an installation of the Flame of Liberty in a public square called Place des États-Unis (United States Place) in the 16th arrondissement, but the then mayor of Paris, Jacques Chirac, was opposed to it. After a protracted period of negotiations, it was decided that the Flame would be placed in an open area near the intersection of l'Avenue de New-York (New York Avenue) and the Place de l'Alma. The monument was dedicated on May 10, 1989 by Chirac.On the base of the monument, a commemorative plaque recounts the following story:"The Flame of Liberty. An exact replica of the Statue of Liberty's flame offered to the people of France by donors throughout the world as a symbol of the Franco-American friendship. On the occasion of the centennial of the International Herald Tribune. Paris 1887-1987."The flame became an unofficial memorial for Diana, Princess of Wales after her 1997 death in the tunnel beneath the Pont de l'Alma.[3] The flame became an attraction for tourists and followers of Diana, who fly-posted the base with commemorative material. Anthropologist Guy Lesoeurs said, "Most people who come here think this was built for her."The site of the monument is served by the Métro de Paris subway station called Alma-Marceau on Line No. 9 and by the RER commuter rail station, Pont de l'Alma, on its 'C' Line, as well as by buses numbered 42, 63, 72, 80, 92, and the Balabus sightseeing buses.