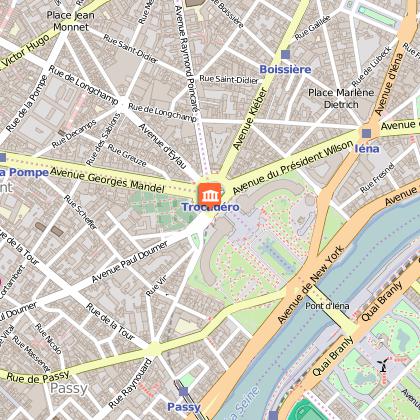 Created in 1869 under the second Empire as " place of King of Rome " (in homage to Charles Joseph Bonaparte, son(sons,thread) of emperor Napoleon Ier), it took the name of Trocadéro in 1877, baptized so in memory of the battle which took place on August 31st, 1823, during whom a French expeditionary force deprived of the hands of the Spanish liberal revolutionaries the fort of the Trocadéro, which defended the port from Cadiz to Spain, and restores the authority of the monarch Ferdinand VII. In 1826, during a reconstruction of this feat of arm during a military parade in front of king of France Charles X, the topography of places serves to represent this battle: the hill of Chaillot represents the " fort of the Trocadéro " and must be then "conquered" from Champ-de-Mars where from left the French "troops" (a fort for pasteboard is built on the hill).Between 1876 and 1935, the place is lined by the palace of the Trocadéro; since the exhibition specialized 1937, this one was replaced by the Palais de Chaillot; the center of the place is occupied as for him by the Column of the peace, realized by Albert Laprade (today disappeared). At the beginning of the xxe century, on the beam giving onto the place understanding the block between avenues Raymond-Poincaré and Kleber, and behind the street of Longchamp is present the deposit of the general Company of local trains; nowadays, cafés and apartment buildings replaced it.
In 1956, the writer Maurice Genevoix inaugurates the Monument to the glory of the French army, Paul Landowski's sculpture, situated along the Passy Cemetery. The current name of the place of Trocadéro-et-du-11-Novembre dates 1978. On May 1st, 2012, a public meeting gathering, according to the organizers, several hundreds of thousand persons is organized place of the Trocadéro: it is about the last public meeting of the candidate Nicolas Sarkozy for the presidential election the second tour of which takes place next Sunday.On May 13th, 2013, a party is organized by the PSG on the place to celebrate the victory of the club of football during the French championship at the end of the week the previous one. Because of several vandals' tens, this one is nevertheless shortened and gives rise to confrontations with law enforcement and to vandalism of brasseries and vehicles parked on the place. This violence is unanimously condemned by the political class but the right denounces a lack of preparation on behalf of Home Secretary and of prefect of police; they question for the future this kind of sportive events in Paris.