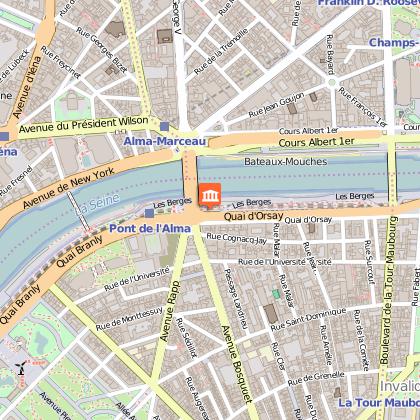 The Parisian sewer system dates back to the year 1370 when the first underground system was constructed under "rue Montmartre". Since then, consecutive French governments have enlarged the system to cover the city's population. History
Until the Middle Ages, the drinking water in Paris was taken from the river Seine. The wastewater was poured onto fields or unpaved streets, and finally filtered back into the Seine. Around 1200, Phillipe Auguste had the Parisian streets paved, incorporating a drain for waste water in their middle. In 1370 Hugues Aubriot, a Parisian provost had a vaulted, stone walled sewer built in the "rue Montmartre". This sewer collected the wastewater and took it to the "Ménilmontant" brook. However the wastewater was still drained in the open air. Under the reign of Louis XIV, a large ring sewer was built on the right bank, and the Biévre River was used as a sewer for the left bank of the Seine. On at least two occasions in the late 1700s, Paris refused to build an updated water system that scientists had studied. Women were actually carrying water from the river Seine to their residences in buckets. Voltaire wrote about it, saying that they "will not begrudge money for a Comic Opera, but will complain about building aqueducts worthy of Augustus". Louis Pasteur, himself lost three children to typhoid. Under Napoleon I, the first Parisian vaulted sewer network was built that was 30 km long. In 1850, the prefect for the Seine Baron Haussmann and the engineer Eugène Belgrand, designed the present Parisian sewer and water supply networks. Thus was built, more than a century ago, a double water supply network (one for drinking water and one for non drinking water) and a sewer network which was 600 km long in 1878.