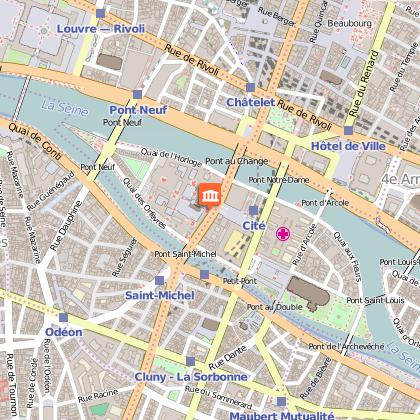 The Palais de Justice (French pronunciation: [palɛ də ʒystis]), located in the Île de la Cité in central Paris, France, is built on the site of the former royal palace of Saint Louis, of which the Sainte Chapelle remains. Thus the justice of the state has been dispensed at this site since medieval times. From the sixteenth century to the French Revolution this was the seat of the Parlement de Paris. The Palais also contains the ancient structure of the Conciergerie, a former prison, now a museum, where Marie Antoinette was imprisoned before being executed on the guillotine.The architects of the monumental white-marble Second-Empire Palais de Justice (built from 1857 to 1868) were Joseph-Louis Duc and Honoré Daumet. The exterior includes sculptural work by Jean-Marie Bonnassieux.Security is maintained by gendarmes.