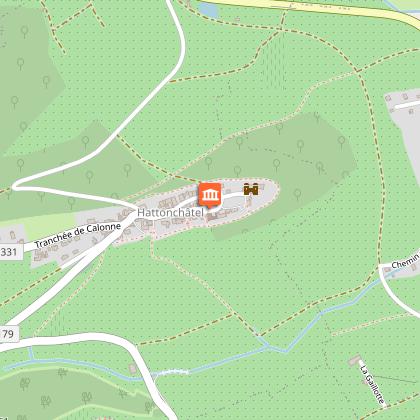 Initiated in 1328, the narrowness of the citadel forced the construction of the Saint-Maur collegiate church in flamboyant Gothic style inside the fortress. Backing against the wall, facing north-south, it has imposed its rectangular shape with a straight chevet. Its bell tower had taken place inside one of the defence towers of the medieval enclosure. The 11th century chapel, which was part of the former Benedictine monastery, houses a 16th century polychrome altarpiece. Made of stone sculpted by Ligier Richier, it represents three scenes from the Passion of Christ. Grüber's stained glass windows were made after the Second World War. The adjacent cloister was built during the 15th century. It kept the cemetery within its walls until 1845. There is only one gallery of five bays left, pierced by trefoil bays. The Gothic keystones represent the arms of Bishop William of Haroncourt. It is classified, like the church, as a historical monument since 1992.