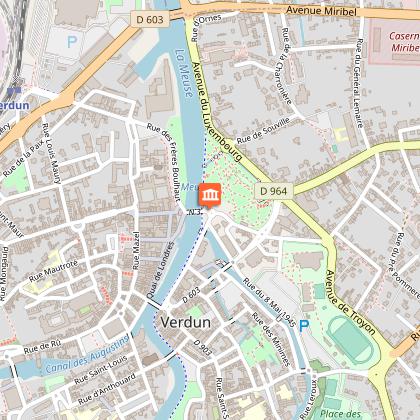 Erected in 1928, the War Memorial dedicated to the Citizens of Verdun is built inside the La Chaussée demi-lune, part of the fortifications constructed by Marshal Vauban in the 17th Century. The Memorial occupies the site of the former military slaughter-house destroyed in 1916. The statues represent the five arms of service of the French Army engaged in the battle of 1916. From left to right we can make out: a cavalryman, an Engineer sapper, an infantryman, also known as a “poilu”, an artilleryman and a reservist. These five soldiers form a human wall symbolising the motto of the City: “They will not pass”. On the base of the monument are inscribed the names of the soldiers from Verdun who died in the First and Second World Wars.

See also: A statue of General Sarrail facing the monument, and a bust of General Mangin fixed on the rampart wall to the right.

NOTE : The patriotic calendar of Verdun is well-filled, and among others, the commemoration ceremonies of 1st and 11th November take place in front of this monument.