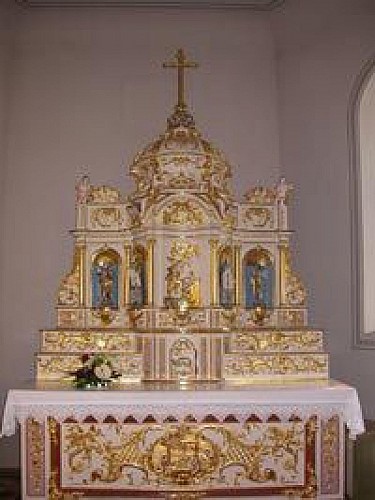 SAINT VIT CHURCH AND ITS FURNITURE

The furniture of the Saint Vit church in Roth have been registered in the list of the historical monuments in 1977. Indeed, among them there is in the chorus a High-Altar from the 18th century richly decorated, coming from Hambach’s church. In a medallion in the antependium (decoration in front of the altar), a polychrome represents the Nativity, the door of the tabernacle the Paschal lamb and in the central niche, the Annunciation in relief. Four little statues of 48 cm high in wood decorate the lateral niches; four angels decorate the cornice formed from a huge crown and a cross. It is a gothic church of which it is impossible to know the exact date of construction. However, the front door of the nave of this building indicates 1721. The tower has been filed as a historical monument in 1916, then unfiled in 1927. With its 15 meters high, it served as sacristy until the building of a new one in 1899 in the extension of the chorus. It is supported by two buttresses whose pediment is decorated in the south-east by a ridiculous human head with bat ears and in the south-west by a kind of ivy leaf. A small door in the west permits the access to the upper stage of the tower. Formerly, Saint Vit church was also surrounded by a fortified cemetery of which there is some elements left on the outer wall.