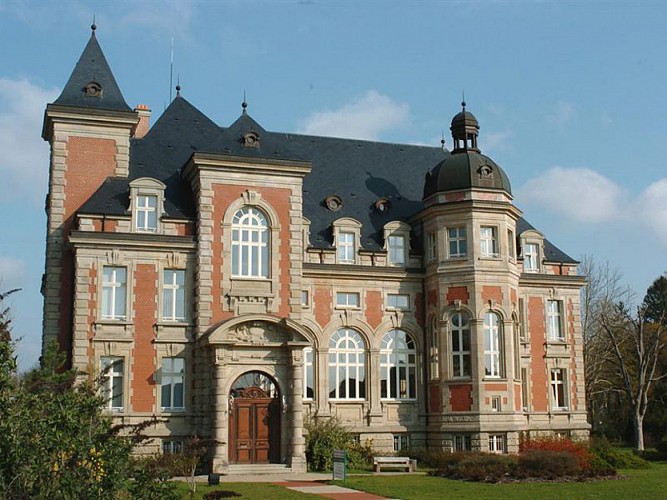 The Château Utzschneider, which today houses the Communauté d'Agglomération Sarreguemines Confluences, is a typical example of the architecture of the late 19th and early 20th centuries. It is an "industrial castle". This villa and its outbuildings, built in the Neunkirch district, are impressive in terms of their size and appearance. The architects Berninger and Krafft from Strasbourg, who came from the Stuttgart School of Architecture, were keen to use asymmetry. The neo-renaissance columns at the entrance and the triangular gables are harmoniously combined with the medieval forms of the turrets and the use of ashlar. The architects built the house in 1906 for the widow Utzschneider, but the family only occupied the residence for 33 years. Between 1940 and 1944, the building was occupied by the Nazis. It was then used by the Americans as their quarters during the Liberation in 1944-45. The property remained abandoned for a long time until H. Pierron acquired the stables and the castle in 56-58 for his scientific and educational facilities. In 1983, the company moved to the industrial zone and the villa was again abandoned, until it was bought by the District of Sarreguemines in the early 1990s. Today, the main building and its annexes have been pleasantly renovated and restored, and the park has been redesigned, thus providing a suitable setting for the Communauté d'Agglomération. The park is accessible to walkers at all times.