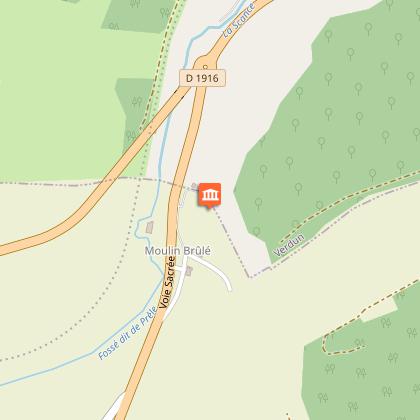 The writer Maurice Barrès christened it the Voie Sacrée, or the Sacred Road, after the ancient Roman ‘Via Sacra’, the road leading to victory. It linked Bar-le-Duc with Verdun and was the main road artery used by the French Army.
A continuous, congested stream of men and supplies used this road both day and night and it was estimated that there was a vehicle travelling through every thirteen seconds. In the summer of 1916, 90,000 troops, 50,000 tons of armaments and equipment travelled the road each week, all heading for the Verdun carnage. And the 45 mile long road was maintained and defended throughout.
The road has been renamed RD1916, a reference to that critical year, and is a national monument, marked by way stones topped with a helmet and the inscription NVS (Nationale Voie Sacrée).