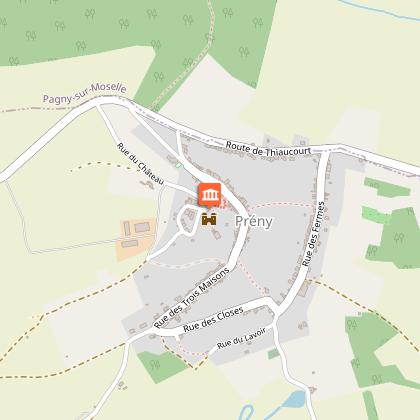 The village, dominated by the castle, is spread over three floors.
The vineyards once stood on the slopes with terraced facing south, giving it the appearance of a village in Provence. Therefore, Prény can not be placed in the category of traditional street-Lorraine villages since they are in the form of two rows of houses situated one facing the other to the street in the center and between usoirs the houses and the road or path where a large street appearance.
In the old village of Prény, the streets are narrow and nonexistent usoirs.
This village is an ancient medieval city. At the top, a castle served as residence of the dukes of Lorraine in the twelfth and thirteenth centuries. In 1139, William said COOL, confessed Prény 1138 to 1168, gave the Abbey of Sainte-Marie-aux-Bois founded for ten years and the ban pastures of Tautecourt and the right to use the Prény ban and its pastures. In 1207, the castle was captured and partly destroyed by the count of Bar, which since its castle of Monsoon, constantly challenges the Duke of Lorraine. The thirteenth century to the first half of the fifteenth century's lives are disrupted regularly by the conflicts between the House of Lorraine to the House Bar or to the bishops and to the Republic of Metz. In the fifteenth century, the rising power of the House of Burgundy becomes threatening to the independence lorraine. Charles the Bold, Duke of Burgundy, invading Lorraine, goes with his army near Prény but refrains well to attack the castle, which after its reconstruction in the years following the 1207 disaster has become a true masterpiece of medieval military architecture, impregnable by force.