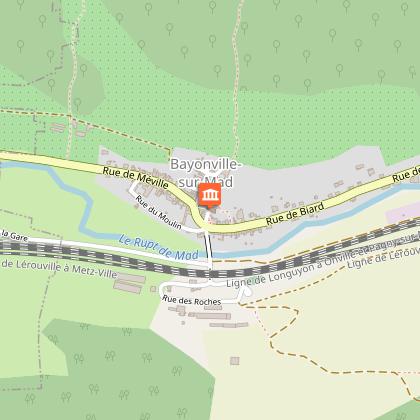 Issues related to the presence of one of the finest vineyards in the sector caused envy to the Carolingian period. It was decided at the Messina yard to give the villa in Saint-Pierre-aux-Nonnains.
from private property, Bayoncourt became Bayonville when the ban was given to the clergy. Saint-Gorgon Gorze retained property in the communal territory, and the appointment of a High-Lorraine Duke at the end of the tenth century was reflected in the amputation of a "fine piece" of local vineyards in favor of the monks of Belgian abbey of Orval. And, once the duke confessed St. Peter in Nonnains, was built on land of this abbey fortress of Prény, part of the village depended directly.
This property of complexity because of the aster St. Julien a special case of Val Mad. Classic Middle Ages, aster took the form of madin model, but with the originality to have at the end of the right wing, a stately house that local tradition called it the "castle with three towers ". The habitat was initially built around the vineyard and the aster.
Around the church, if the side cemetery disappeared, homes and houses are still there on more than half of the "horseshoe". In 1826, the bell tower was still equipped with a hoarding, then removed for run down and replaced by the "floor of the belfry" covered slate.
The most powerful buttresses that still owns the church attest that it has not had in the eighteenth century of major refurbishments. The current altar bears a remarkable tabernacle dating from the early years of the eighteenth century.