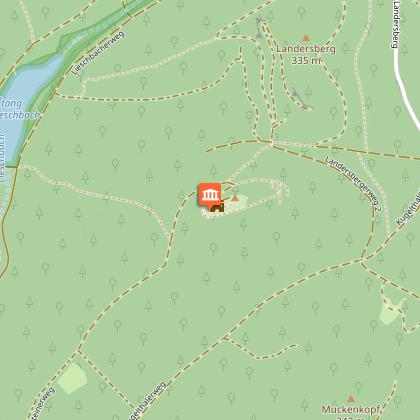 THE RUINS OF FALKENSTEIN AND HELFENSTEIN CASTLES

The Falkenstein castle is the most important castle in Pays de Bitche. It was built in th 12th century under the Count of Lutzelbourg's orders to protect the Holy forest of Haguenau. In 1564, the last Lord of Falkenstein sold the castle to Philip IV of Hanau Lichtenberg. The structure was in flames for 5 days and nights. Several buildings were rebuilt rather hastily but were finally dismantled by the French in 1680.

The ruins that remain today crown a large sandstone rock, 117m in length, 2 to 10m wide and 22m high. Once inside the arched entrance, the shape of a head of a falcon can be distinguished in the overhang of rock - Falken: falcon, Stein: rock.

On the same ridge, to the side of the Falkenstein, is Helfenstein castle, "the rock that brings help".

In 1410, this castle was built with the money from the villagers in Butten, Kirspach and Birsbach, the Duke of Lorraine's fieifs. It was destroyed in 1435. Several signs can still be seen: walls, a well, carved steps in the rock...

The access is indicated from Philippsbourg. Once at the forestry carpark, it takes 20 minutes to reach the ruin.