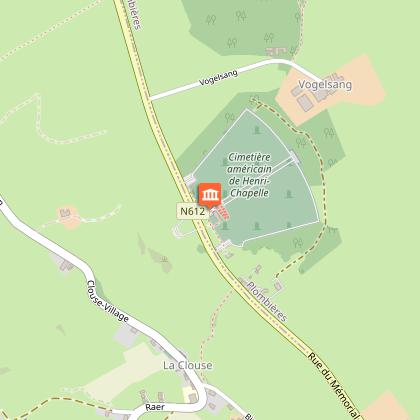 The American military Cemetery covers an area of roughly 23 hectares and was established in September 1944 by the First Infantry Division of the First American Army. The cemetery and memorial were completed in 1960. 7992 American soldiers who died during the advance of the 1st Army through northern France, Belgium, the Netherlands, Luxembourg and Germany and during the bitter "Battle of the Bulge" of winter 1944-1945 lie in this necropolis. On either side of the columns, listing the 450 missing soldiers, are the chapel and the visitors' room, greeted by vast wall maps detailing the various Allied offensives in the reconquest of Europe. In addition to the cemetery’s information available, visitors are also invited to sign the register. In this room you will also find a large documentation, as well as an interactive video dealing with the war in its many aspects. Finally, opposite the memorial, on the other side of the road, an esplanade offers a nice spot for a panoramic view on the Herve region.