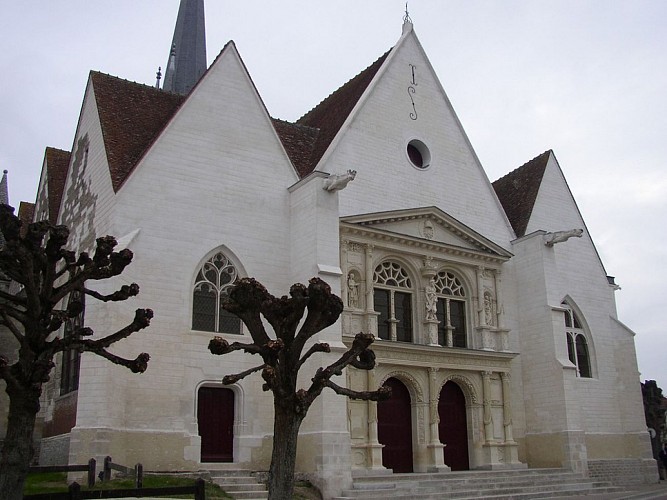 The church of Saint-André, in the commune of the same name, is very homogeneous. It was rebuilt during the first half of the 16th century, from east to west. Its south portal, in flamboyant style, is dated 1545. With an elongated plan, the church, entirely vaulted with warheads, has a nave largely dimensioned with three ships and six bays long. The apse is three-sided. The bell tower rises above the nave. The church preserves elements of old glazing mainly in the tympanums and lancet heads; except for bay 3 (life of Saint Gilles), whose panels are complete, although very disorganized. The preserved elements of old glaziery essentially date from the first quarter or even the first half of the 16th century. However, bay 7 also seems to have fragments of the earlier building: a Christ may be judging from the 14th century, a Saint Michael weighing souls from around 1480 and a Saint Quirin from around 1500. The 16th-century stained-glass windows come from the Trojan environment: the bay depicting the life of Saint Gilles is related to that of the church of Saint-Nizier in Troyes, and the one showing the Coronation of the Virgin by the Trinity can be compared to the stained-glass windows of Noës-près-Troyes and La Chapelle-Saint-Luc. The main restoration of the old stained glass windows took place at the end of the 19th century. The stained glass windows of the apse date for the most part from this period: the axis bay and the north bay (life of Christ and life of Saint André) were made in 1866 or 1868 by Cornuel; and in 1862 Vincent-Larcher produced a legend of Saint Frobert, completed and put in place south bay by Biberon in 1874 (complementary antique stained glass windows). Remaining in place during the Second World War, all the stained glass windows were untouched by the conflict. The building and stained glass windows have been classified as historical monuments (under the title of buildings) since 1840.