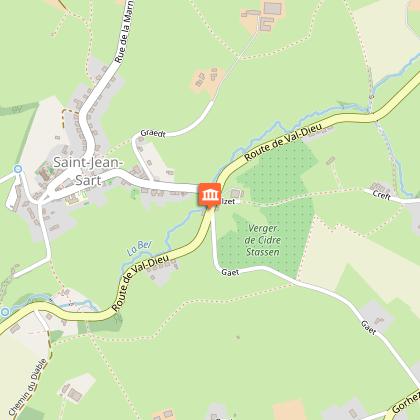 Founded by the Cistercians in 1216 at the confluent of the Bel and the Berwinne, the Val-Dieu abbey, in its present form, is the sole abbey in Belgium to have survived the French revolution.Apart from a few roman relics, most of the buildings date back to the 17th and 18th centuries. The abbey features various items relating to farming activities (brewery, stables, barn and mill) as well as the abbey church rebuilt in the 19th century, which was established as a basilica after the Second World War.Visitors can join a guided visit to discover the key locations of monastery life, such as the chapter house, the refectory, the scriptorium and the abbot's quarters.As skilled farmers, the Cistercians managed to maintain the Val-Dieu site with its splendid park, as an oasis of greenery that is just perfect for attending to the spiritual and cultural system of beliefs that has developed over a period of nigh 800 years.The Courtyard and the Church are always open.