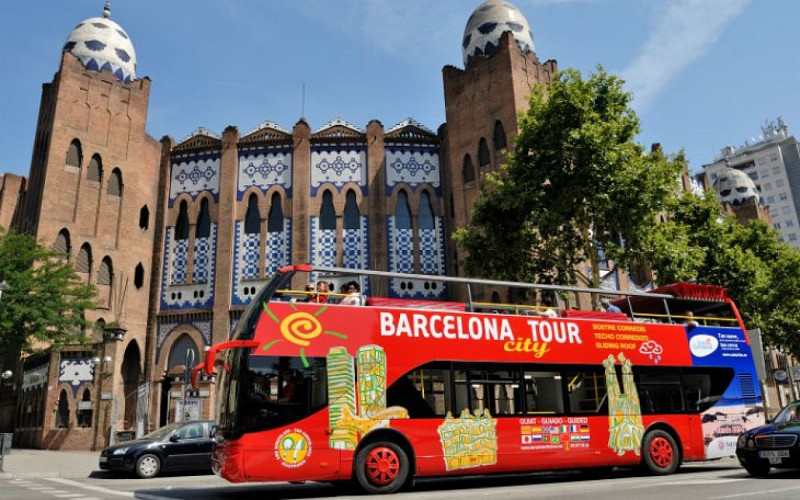 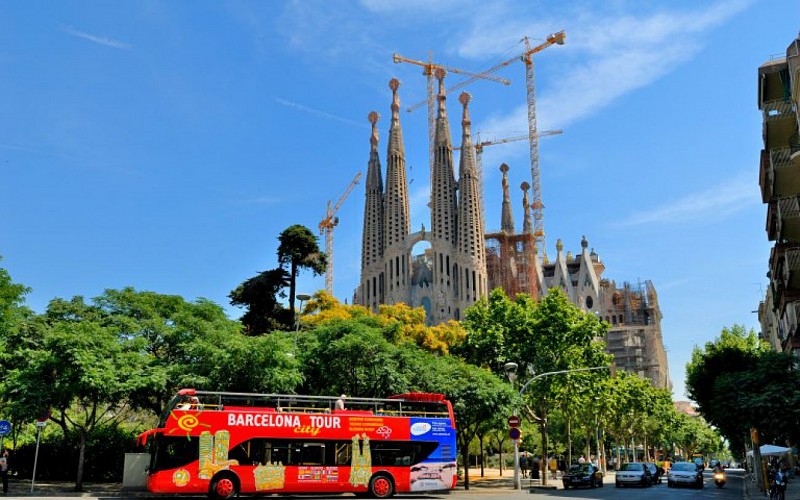 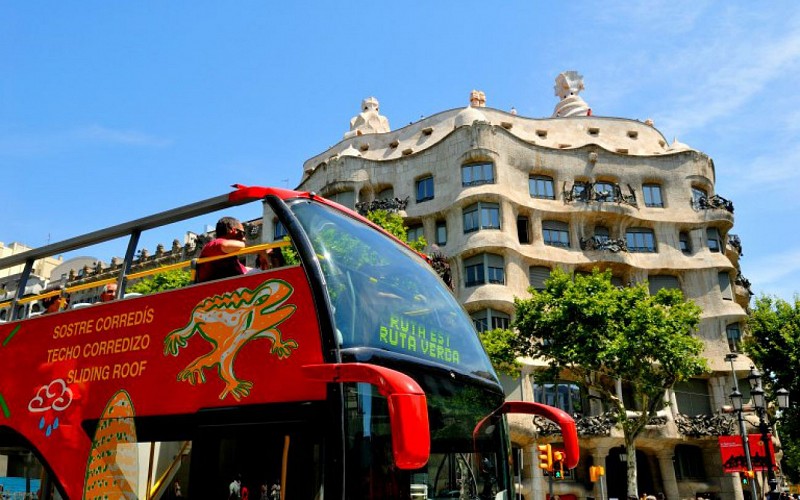 ArrayYour Experience
With this Hop-on-Hop-off tour, you get to explore the best of Barcelona at your own pace on a convenient hop-on-hop-off bus! You can get on and off all day and learn about the history of the city through a comfortable audio system with earphones. It is available in 15 different languages. You will also receive a map of the city containing all the stops of the route, and discounts for different establishments of the city.
Once on the bus, you will get to admire the Gothic architecture of the magnificent Barcelona Cathedral and enjoy the city's famous promenade, La Ramble. Witness the genius of Antoni Gaudi at his iconic creations like Park Guell, Sagrada Familia, Casa Batllo and others. Enjoy tourist hotspots such as Mountain Tibidabo, which offers a great lookout and is a great place to blend with nature.
In addition to the open-top, the busses also boast of an electric roof which can be used in the event of an unexpected shower of rain. The buses are fully equipped and adapted to people with mobility issues. There is also an attendant on board to look after anything that you may need.
5 Must See Attractions
Sagrada Familia - East/Green line, Stop #10
The Basilica of the Sagrada Familia or the Holy family is a vision to behold and is one of the most breath taking basilicas in the world. This is the biggest church building in the world an is bound to overwhelm you with its sheer scale alone. Built by Antoni Gaudí, he worked steadily on his magnum opus until his death in 1926. After that, several architects have attempted to continue his legacy. Explore tickets here.
Casa Batlló - West/Orange line, Stop #19 and East/Green line, Stop #15
While you’re in Barcelona, you cannot afford to miss the Casa Batllo - an architectural beauty created by Antoni Gaudi. If you are intrigued by experimental art and bold moves in architectural design, you cannot leave without visiting this fascinating building. Explore tickets here.
Park Güell - East/Green line, Stop #10
Visit Park Güell, Antoni Gaudi’s flamboyant creation and one of the most visited attractions in Barcelona without hassle while saving both time and money! Situated on Carmel Hill, the park provides incredible views of Barcelona that you just can't miss! Explore tickets here.
Campu Nou (F.C. Barcelona)- West/Orange line, Stop #19
Feel the adrenaline rush that accompanies stepping into the 2nd largest football stadium in the world! Enter the battle ground that is Camp Nou, home to FC Barcelona since it's completion in 1957. Explore tickets here.
Catedral-Barri Gòtic - East/Green line, Stop #2
The Cathedral of the Holy Cross and Saint Eulalia, also known as Barcelona Cathedral, is the Gothic cathedral and seat of the Archbishop of Barcelona, Spain. The Cathedral is a stunning example of Catalan Gothic architecture. Walking through the palm-strewn cloister is an experience that you just can't miss.
Ticket Information
In the next step of your booking, you can choose between -

This ticket offers a sightseeing experience that lets you decide your own travel itinerary through the enchanting city of Barcelona.
You can choose between a 1-day and 2-day pass. Your ticket stands valid for two different routes, allowing you to see more of Barcelona. Hop on and off at any of the 35 stops along the route to gain the most out of this experience.
Enjoy a range of services onboard like free wifi and an audio-guide in 15 languages.
Marvel at the best of Gaudi's creations such as the Sagrada Familia, Park Guell, and many others.
Visit Camp Nou, FC Barcelona's (Barça) Football Stadium or admire the Barcelona Cathedral, and many other top attractions on a hassle-free journey through the city.

Know Before You Go
The Two Routes -
West/Orange Route
The West Route will introduce you to the western part of the city of Barcelona and runs through several interesting places like the Rambla, the cruise-ship terminal, Montjuic Mountain, the Plaza de España and the Camp Nou Stadium. This route lasts about two hours, depending on traffic.
East/Green Route
The East Route will take you on a tour of the eastern part of the city of Barcelona as it winds through various places like the Gothic Quarter, the Aquarium, the seafront, Agbar Tower, the Sagrada Familia and Park Güell. This route lasts about two and a half hours in the summer and two hours in the winter, depending on traffic.
Service and Schedule
The service remains uninterrupted throughout the year, except during Christmas (25 December) and New Year’s (1 January). The approximate duration of the routes in summer is 2 hours for the Orange/West Route and 2 hours 25 minutes for the Green/East Route.
In winter, the estimated time for both routes is around 2 hours. The service starts at 9:00 AM and the last tour starts at 8:00 PM during summers and 7:00 PM in winter from Stop 1, on Plaça Catalunya.
Bus Frequency
Service frequency varies between 7 and 25 minutes, depending on the time of the year.
Additional Information

The audio-guide is available in 15 languages - Spanish, Catalan, English, French, German, Italian, Portuguese, Russian, Hindi, Chinese, Dutch, Japanese, Arabic, Swedish and Hebrew.
When you board the bus, you’ll be given a brochure with a plan of the city and details of the routes with a description of the stops. The brochure is available in up to 6 languages, depending upon availability: Catalan, Spanish, English, French, German and Italian.
While onboard the Barcelona City Tour you'll receive a discount book that you can use in restaurants, stores, guided tours, transport and many other attractions.
Children aged 3 and under travel free of charge. Everyone aged over 65 enjoy special prices.

Flexible Cancellation Policy
You can cancel these tickets upto 24 hours in advance for full refund.

Your voucher will be emailed to you shortly. Please display the same on your mobile phone with a valid photo ID at the time of redemption.
Ticket Redemption Point
Please check your final voucher for redemption point details and specifics.
Validity
These tickets are valid for the date chosen during purchase.

Food and drinks, unless specified
Hotel pickup and drop-off