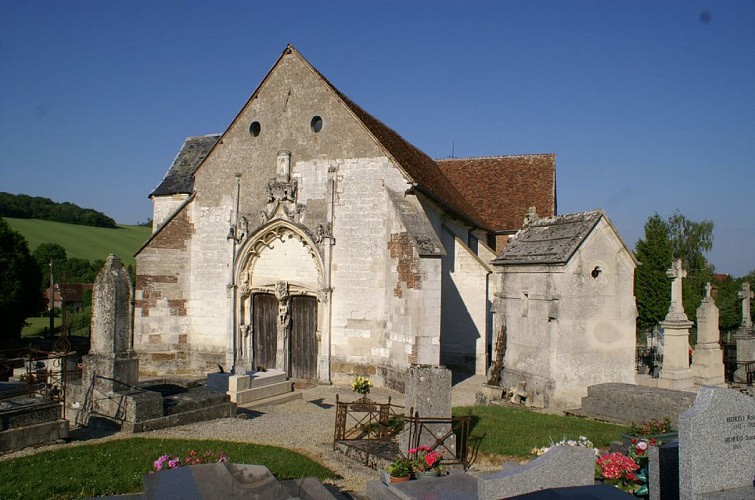 The church of the Assumption of the Virgin of Javernant was formerly a branch of Saint-Jean de Bonneval and was only erected as a parish church in 1747.
With a simple Latin cross plan, the church has a single nave with three bays, a projecting transept and a three-sided apse. The building is homogenous; it was started from the east during the first quarter of the 16th century. The two western bays are somewhat more recent and date from the second quarter or mid-16th century (an altar was erected in 1560). It ends with a beautifully carved western portal in the flamboyant style with Renaissance decoration, which displays the painted signatures of L. Cabutel and C. Paiso. Original stained-glass windows remain in the three bays of the apse and, in fragments, in two bays of the transept and one east bay of the nave. The three windows of the apse are composite and contain panels from at least five different bays.

The themes represented are Genesis, probably executed on the model of the glass roof of the Madeleine of Troyes, the Tree of Jesse painted after the series of cartoons used in the church of Noës-près-Troyes, the Life of the Virgin and of Christ and finally the life of Saint John the Baptist which is similar to those of the churches of Ceffonds (52) and Ormes (10). The axis bay, whose inscribed date has been interpreted as 1518, shows a donor parish priest presented by Saint Nicholas and various more or less complete scenes such as the Crucifixion, the Annunciation, the Adoration of the Magi, a figure of the Baptist.