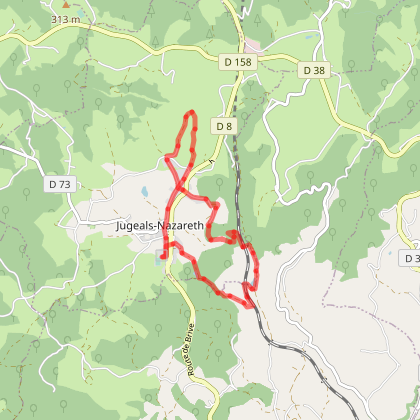 Eight from the Couze to the Torment

On the plateau, the Gallo-Roman road through the village was a principal axis. In the Middle Ages merchants, pilgrims, armies, royals came under a small but historic porch: until 1738 it was a place of toll on the edge of the Kingdom of France and the Vicomte de Turenne, his farm housed a kibbutz in 1933-35. Along the street, Notre Dame chapel, the "Charentais" houses . The ancient path through a furrowed farmland which was a battlefield against the Duke of Lancaster. This first loop returns to the cemetery before going down to the stream of Torment. Troglodyte caves in the valley. The tunnel, a railway track, was the longest in France: more than 2000 m. The fifth deck of the circuit traces the history of the Moulin Deschamps, and time of winemaker from Nazareth to Turenne. Admire the citadel on its promontory before returning to Nazareth.