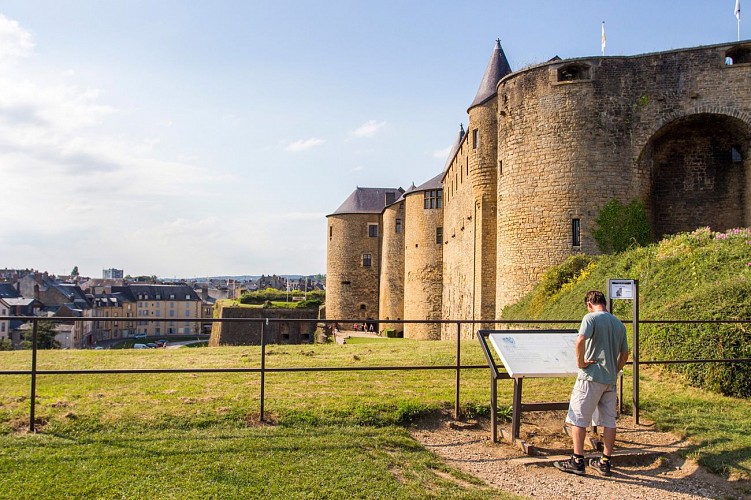 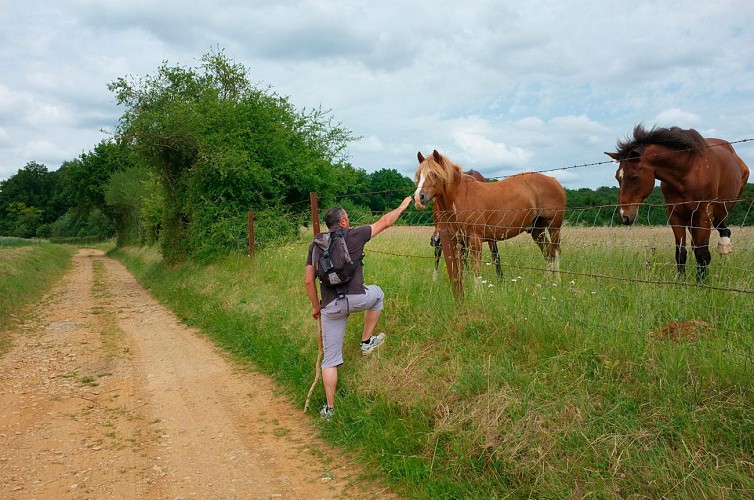 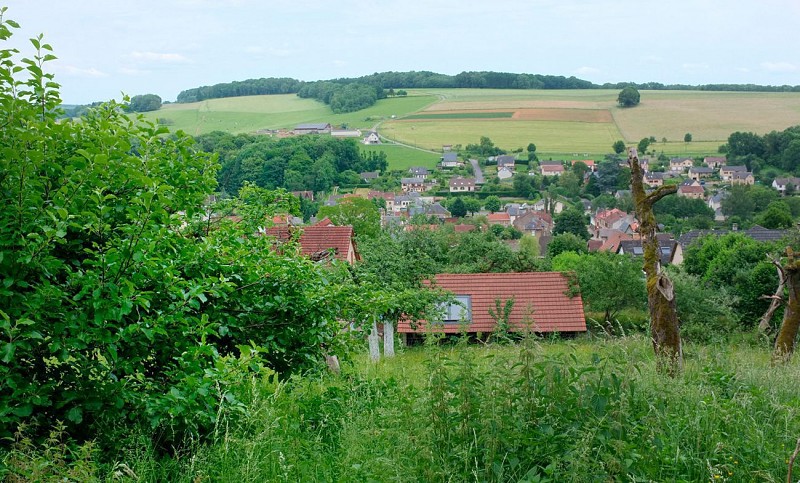 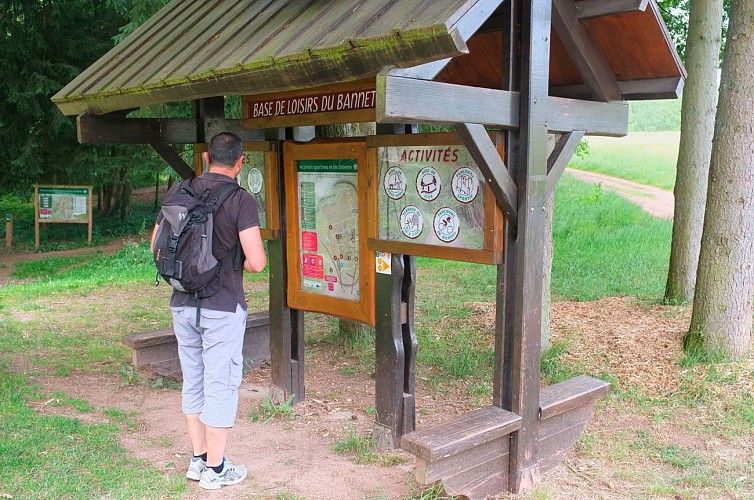 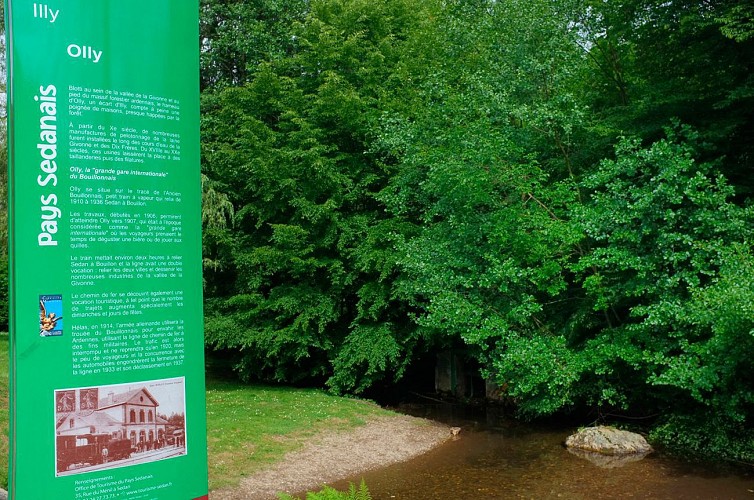 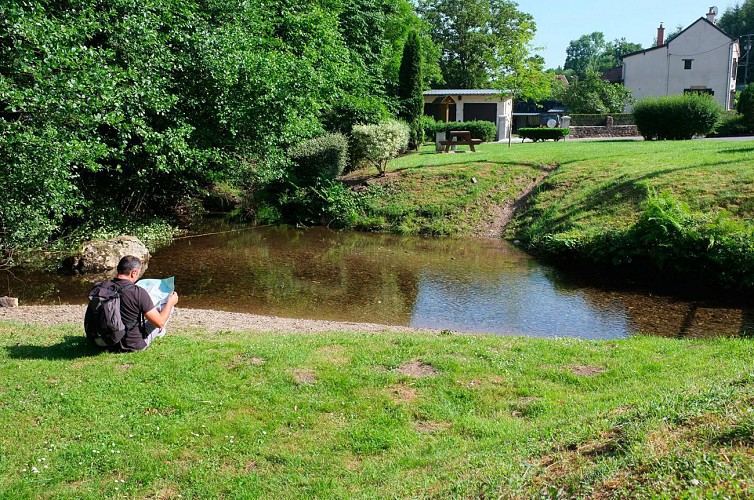 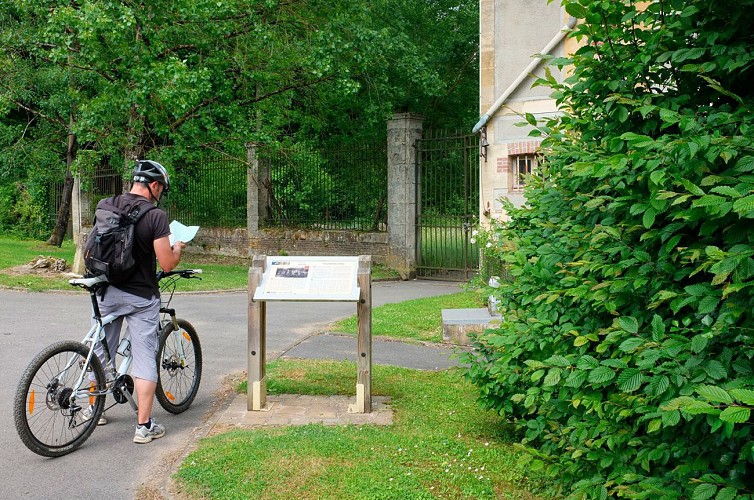 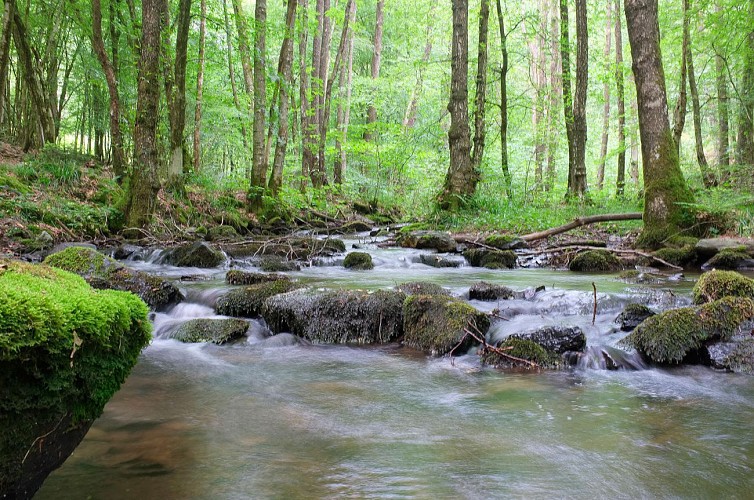 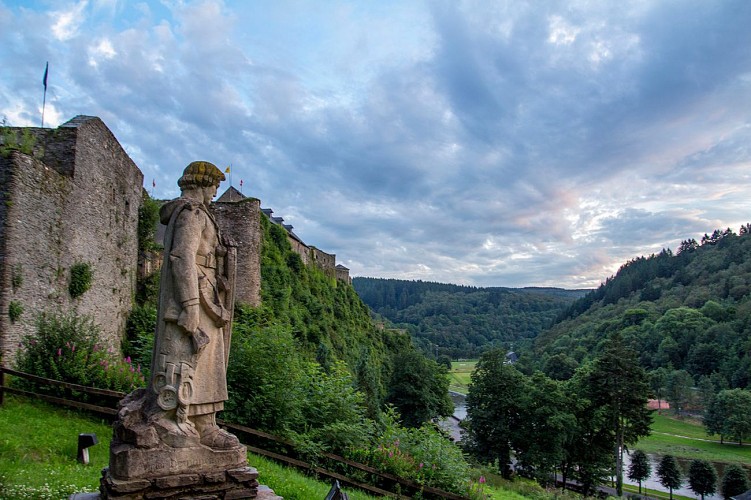 Allow two days for this route, used for centuries to travel between Sedan castle and Bouillon castle in Belgium. A walk where water, the forest and nature are omnipresent. Although neighbours, these two regions belong to very separate lands. One nestles in a fold of the Ardennes massif, while the other stretches along the banks of the Meuse river, near the first slope of the Parisian basin. The two towns have been sisters for a thousand years, linked by history since the signing of the Treaty of Verdun in 843 dividing up the Carolingian Empire. Along this circuit you can explore Europe’s largest feudal castle in Sedan, experience Godfrey’s first crusade at the castle and archeoscope in Bouillon and take part in medieval festivals… all in an outstanding forest setting. Breathe!

The starting point: the fortified castle (from the Porte des Princes car park)
Waymarking: Yellow
Sedan is a town set in the countryside... You realise this immediately as, with joy, you climb the last few steps of the ramparts surrounding this formidable fortress. After a few metres poppies can be seen, red dots in the pastoral landscape. The view is magnificent. Vast swathes of fields giving way in the distance to the slopes of the Ardennes which we will be joining as we go down towards the little valley where Givonne lies snuggled up...

GIVONNE and the leisure of Bannet

Along the way …
A long downward path takes us to Givonne: the last village before the sprawling Bouillon forest. Going along the stream, walkers will come across the Bannet leisure park, ideally situated in this green setting. The area abounds in paths and trails, with something to suit every taste and every wish: on foot, on horseback or by mountain bike!

Along the way …
The paths laid out in the leisure park lead to Olly, a former border post surrounded by forests. The peace and quiet that reigns here today is in stark contrast to the hustle and bustle of the 19th century, when trains brought tourists to taste the delights of forest walking or simply enjoy a beer in one of the taverns. The trip on the “Bouillonnais”, which ran between Bouillon and Sedan, took two hours, a real local train! It also served the industries of the Givonne valley, to which the lakes and old races along the route bear witness even today.

Along the way…
From the old railway station, the route plunges into the lost valley to reach the border: the path has remained wild and isolated. Animal trails blend with the footprints of men. Now dark, now light, as canopies of spruce and broad-leaved trees alternate, the forest abounds in a wide variety of biotopes. We have the impression that we are evolving in a vast natural garden: a pleasure for the senses. The path running along the river is wonderful. It is our Ariadne’s thread leading to the ridge: welcome to Belgium!

The border to ramonette
We join the route de Corbion, taking it on the right along the ditch.
The wood we are walking alongside is called the Extrémité, an old, dark estate sold as national property at the time of the French Revolution which came into the hands of the town of Bouillon in the 20th century.
We then cross the old Boucauderie cluster of oak trees to the relay tower (alongside the Vieille Route de France) and join waymarked path No 11 to cross the Gernelle before going down towards La Ramonette.

The route leads down towards the site of Baimont mountain known as La Ramonette (a ‘ramon’ is a brush made of broom) or La Romanette, to create the impression of Gallo-Roman origins. This old watchtower surrounded by ditches and talus once fenced in, built to survey the town and citadel of Bouillon, offers a clear view over the river and its three bridges, the enfilade of the fortified castle stretching 330 metres and the listed houses dating from the 17th and 18th centuries.
Now we simply have to go back down to towards the city along the small, waymarked path No 10.

We arrive in Bouillon at the end of a marvellous nature walk….

From Bouillon, to Sedan:
The route can, of course, be taken in the other direction.
It is not advisable to start by climbing directly to La Ramonette. So it is a better idea to follow waymarked path No 12 along the Semois to the monument of the shot and then join circuit No 11 which leads to the Boucauderie and the border.