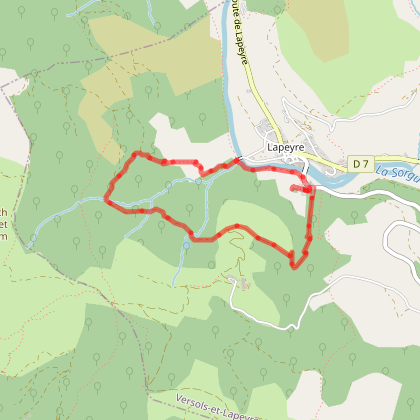 From the Sorgues valley to the Clipis plateau, enjoy a very refreshing loop that winds its way throughout small shady valleys and follows a creek flowing along a local curiosity: the Frégière former plaster mineFrom Lapeyre to the Plo de Labade: From the carpark take right the D92 for a few metres, fork to the right onto a path called "la Mine" which runs along the Frégière brook, and walk past a building of which only remains the restored dwelling part. The ground level and the rear part of the building used to host the plaster plant. Carry on the path which runs along the fields up to the Clipis intersection.From the Plo de Labade to Clipis: Take right towards Clipis, pass the building and walk along a lake.From Clipis to Lapeyre: Take to the right the Bourgatte path that runs downhill towards the Lapeyre old bridge. Do not cross the bridge, but take the descending path on the right that goes across a footbridge, then passes by a cave and reaches the road to Gissac and the carpark.

Be prepared for coolness: there’s a good reason this site is called La Frégière! Remains of a disused gypsum quarry and plant are evidences of an obsolete industry: gypsum quarrying, which was flourishing around Montaigut at the end of the 19th century. Small springs and steep-sided paths punctuate this circuit that leads you to a plateau, with a view over the Sorgues valley.

From Saint-Affrique, follow the D7 towards Cornus. Once in Lapeyre, which is the first village you drive through, turn right towards Gissac and park your vehicle next to the graveyard.

Box tree months are active from May to October. During the caterpillar phase, they feed on the leaves of box trees. They crawl down trees and move on long silken threads, although these threads are annoying when hiking they do not pose any health risk