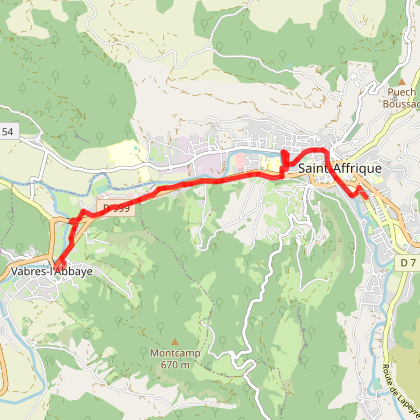 This pleasant stroll which runs along the banks of the Sorgues river and follows the course of an ancient railway allows to discover Saint-Affrique and the Episcopalian city of Vabres from a new perspective.From the Social Centre "Le Quai" (former station), head towards the bd de la Capelle and walk along the Super U supermarket, turn to the left to  leave the road and take the green lane. Walk behind the        retirement home. Carry on along the quays bellow the church, pass under a bridge and after having walked across the carpark, turn left on the rue du général de Castelnau. Follow this road for less than 200 m and go down left to amble on the green lane, alongside the river. Pass under a bridge and reach the roundabout. Turn right to walk across the bridge, then turn right once more just after the bridge (do not go up to up to the traffic lights), then turn to the left (between the apartment block and the Hospital), walk carefully across main road and take opposite a very small road that leads you to the green lane. Follow the green lane for 1.2 km, cross main road on the Pedestrian crossing and get back to the green lane opposite. As you reach a business park, pay attention to the green lane markers; at the roundabout carry straight on. Once you’ve passed the insemination centre of the General Confederation of Roquefort, turn to the left and walk between fields, then along houses. Follow main road on the right for 200 m, then turn to the left to pass between the community hall and the chemist's. You now reach the Camper-van service station, turn right to walk into the tree-lined alley up to the far end where you turn right twice to get back to main road.Retrace your steps back to St-Affrique. 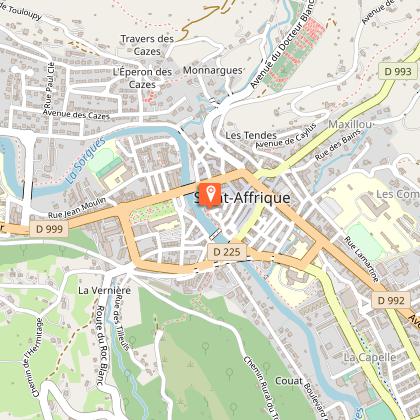 The river banks and a railway converted into a green lane offer you to saunter along the «banks and greenery» side of Saint-Affrique. This outing is an unusual way to discover six bridges that span over the Sorgues or the Dourdou rivers: Railway Bridge, Centenary Bridge, medieval Old Bridge, pont Neuf (new bridge), Resistance Bridge, and Vabres Bridge.

Box tree moths are active from May to October. During the caterpillar phase, they feed on the leaves of box trees. They crawl down trees and move on long silken threads, although these threads are annoying when hiking they do not pose any health risk